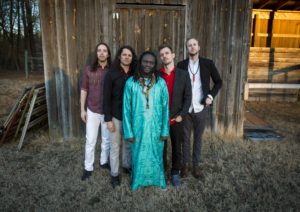 Together, Diali Cissokho & Kaira Ba sustains one of West Africa’s most expressive legacies with their own energetic interpretations.

When Cissokho immigrated from Senegal to North Carolina, he initiated a collaboration that he hoped might bridge the Atlantic, connecting worlds thousands of miles apart but bound by a shared history. Over the past eight years, Kaira Ba has done just that, producing three full-length albums, touring extensively in the United States, and voyaging twice as a band to Senegal to collaborate with Diali’s extended family and community. In 2014, the band was nominated for the prestigious continent-wide All Africa Music Award (AFRIMA) in the category “Best African Group” for their album The Great Peace. In 2018 the band released Routes, its most ambitious album to date. Recorded in both North Carolina and Senegal, the album was met with critical acclaim. Songlines hailed the album as “up there with the groundbreaking recordings of Thione Seck, Baaba Maal and Youssou N’Dour.”

Kaira Ba is available for performances as well as classroom presentations and workshops. Facilitated by Duke University ethnomusicologist and band member Jonathan Henderson, along with members of Diali Cissokho & Kaira Ba, these experiences offer a unique window into West African music and cross-cultural collaboration through the arts. Study guides, extended presenter resources, and scores are available upon request. The band will work with presenters to customize residency experiences, but a sampling of workshop and presentation topics includes: