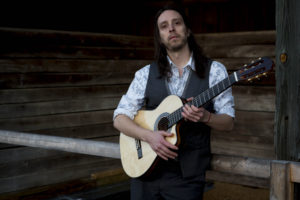 John Westmoreland has been performing professionally for over a decade. He began playing blues, rock, and folk music as a teenager and went on to study Jazz and Classical Composition at Berklee College of Music where he was a recipient of the BEST scholarship. In 2011 he became a founding member and lead guitarist for Diali Cissokho & Kaira Ba. John also writes and performs his own original music which can be heard on his 2018 debut album “Cast Fire.” Aside from standard performance contexts, John provides music for yoga classes and meditation, relaxation music sessions for people with Alzheimers and Dementia, and performs as part of UNC Hospital’s Door to Door music program. In 2014 with the help of an Emerging Artists Grant from the Durham Arts Council John travelled to South America to study ceremonial healing music of the Upper Amazon and Andes regions of Peru. Currently he’s working on a performance and ancestral research project centered around the life and work of T-Bone Slim (Matti V. Huhta), a first generation Finnish-American hobo poet, songwriter and activist who John recently discovered was his great grandmother’s older brother.