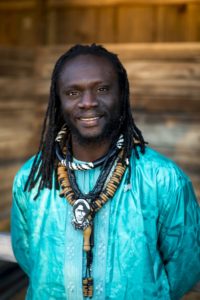 A renowned korist and percussionist from Senegal, Diali moved to the US after years of performing and teaching in Senegal and in Europe. Born into a rich ancestry of Manding griots (jalis), Diali has been playing traditional West African music for as long as he can remember. While his greatest love is the kora, a 21-stringed West African bridge harp, he is also an accomplished singer, songwriter, and percussionist. Historically, each village had its own griot who told tales of births, deaths, marriages, battles, hunts, affairs, and other important events and celebrations. In Mande society the griot, or jeli, served as a historian, advisor, praise singer, and storyteller. These musicians served as walking history books, preserving and sharing the stories and traditions of their culture through song. This inherited tradition, with deep connections to spiritual, social, and political powers, has been passed down through generations. Diali’s mother, MoussuKeba Diebate, and father, Ibrahima Cissokho, both hailed from long lines of griot musicians. Diali’s grandfather was the famed griot korist Lalo Keba Drame, who was among the first griots to tour internationally in the 1960’s, after his recordings became popular both within and outside of Senegal. Diali seeks to honor his ancestors through all of his work as performer, teacher, and collaborator.