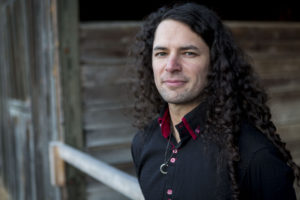 Austin McCall is a professional musician from Chapel Hill, NC specializing in drum set and percussion. He has studied with some of the Greats such as Mama Kone (percussion, Habib Koite), Frank Worrell (drum set, Jack Dejohnette), and Billy Martin (drum set, Medeski Martin & Wood). He has travelled studied percussion and drum set in many places over the years, including 3 trips to West Africa. Austin is a co-founder of Diali Cissokho & Kaira Ba, and performs with other acts such as Paperhand Puppet Intervention, Jonathan Byrd, Violet Bell, and Scythian. He is the co-creator/co-director of “Lumanity”, An illuminated spectacle of one’s journey through light, and rhythm. Austin’s approach to the drum set is not only one as a drummer, but also a percussionist, which allows him to explore the possibilities from a different angle, such as playing dun dun, calabash, or djembe patterns on drum set.